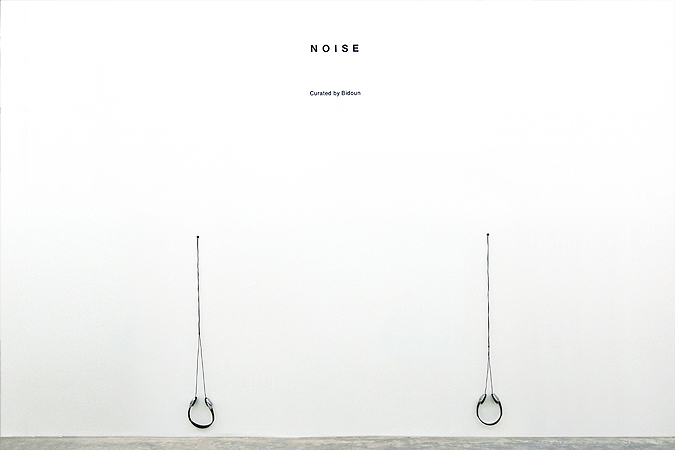 BEIRUT – From the din of cultural initiatives, exhibitions, symposia, biennials, group shows, and surveys mounted to confront, mediate, meditate, cross-pollinate, advocate, decry, valorize, deny, expose, represent, reconsider, reappraise, reify, or, better yet, to re-unveil what it means to make, show, and sell art in the Middle East, Bidoun magazine responds with NOISE, an exhibition opening December 9 at the Sfeir-Semler Gallery in Beirut.

Between the first generation of post-9/11 cultural survey shows and the reflexive gymnastics of the next generation—which aimed to problematize the legitimacy of yet another regional survey while managing, miraculously, inevitably, to deliver one—Bidoun attempts to close its eyes and tune its ears to the white noise of the white cube, wondering how much it matters which city, region, country, or peoples surround it.

As it happens, it does matter, but perhaps not in ways expected. Rather than curating works to illustrate problems plucked from a readymade critical lexicon, NOISE attempts to let these problems arise from, and give rise to, the works themselves, opening the door to the unexpected, and even to the uninvited. The exhibition’s point of departure is the space itself. Its location in Beirut gives it its critical acoustics, but it retains the conceited platonic generality of any clean post-industrial art space, anywhere in the world.

Included in the show are a number of special commissions. A text piece by Lawrence Weiner runs along the gallery’s windows facing the Dora Highway. On the roof, a large neon sign by Vartan Avakian spells out SFEIR-SEMLER (the gallery was previously unmarked) in Devangari script, facing the newly emigrated Asian population in the neighborhood below.

In one room of the gallery hang the unsold works of Syrian modernist painter Marwan from a retrospective earlier in the year. The room, housing the modernist works, is dominated by an obtrusive white cube, leaving the paintings impossible to view except at an uncomfortably close proximity. Alongside a series of photorealist paintings of exhibition catalogs from the Museum of Modern Art in New York, artist Steven Baldi has sealed off one entire side of the gallery with a glass wall, forcing visitors to retrace their steps to see the show in its entirety. Alessandro Balteo Yazbeck and Media Farzin contribute a sculptural installation that tells the story of a cultural moment born of the Cold War that continues to have eerie resonance today. And Babak Radboy has installed a section of gallery wall on loan from the Tony Shafrazi Gallery in New York, along with a photograph of the corresponding hole left by its removal.

Also included is a new series of photographs by Walead Beshty printed from film damaged as it passed through Beirut’s airport security, as well as glass and copper sculptures destroyed in shipping, and a cartographic ping-pong table by Rayyane Tabet that traces the strange contours of a cultural exchange between an American drinking game and one of Lebanon’s most famous explosions.

Scattered throughout the space are a series of polaroids by Haris Epaminonda taken from the insides of obscure books and magazines, alongside an enigmatic video piece.

Yoshua Okon presents one and a half videos on the state of cultural production in his native Mexico, and Mounira Al Solh and Bassam Ramlawi make their painting debuts.

Also making her exhibition debut is gallerist Andrée Sfeir, as herself.