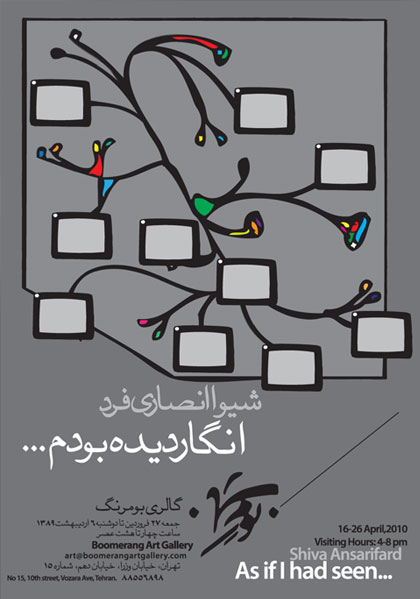 Shiva Ansarifard
As if I had Seen…

At the first glance, Shiva Ansarifard’s installation appears to the viewers like a mountain of images trapped inside the monitors yet floating in the space. It fits our primal feeling of suspense which keeps us waiting to see the flow of images, the way we are used to in front of the television. But this is not going to happen, that televised data invasion has been reduced to collage pieces in the flickering light of LED. As if they have another expectation from us: to go closer and look more carefully, and trust our interpretational intuition.
Ansarifard’s Lightboxes fill the room with a glimmering light, refuse to overwhelm the spectators in a modest way. Unlike the chaotic clustered TV installation of Nam June Paik, it abandons the pre-recorded footage and the 40-year-old desire for speed. Unsteady rapture of the ’70s becomes frozen by the blink of an eye confronting the stillness of the work. The Media is still the message in this artwork, but the message is no longer the Media.